Thanks for posting the photo of your work George, that makes it much easier to follow. Especially because the syntax in your typed version of the equations is not quote right.

If you followed exactly what you typed, it would be like this:

Because of missing parentheses. I thought that was probably not what you meant.

However, with the photo, it’s clear what the original problem is and what to fix: 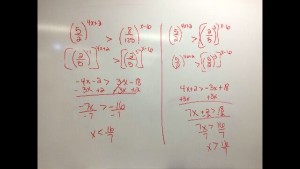 And it’s also good to see your work.

Essentially, in the problem you have the same base for all the terms (2/5) and similar exponents.

For the first variation, you have an additional negative sign in the exponent of the left term. 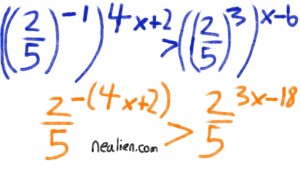 The blue is the original, orange is simplified.

For the second variation, you have an additional negative sign in the exponent of the right term.

Your work is mostly right, but here’s the first mistake I see on the left side:

I would recommend keeping the base the same for all the terms, 2/5 for this problem. At least for me, it’s easier to work through that way.

The other difference for the right side of the board is the negative sign in exponent of the right term (in front of the 3).

You basically turned the base of the right term into 5/2, which is okay.

But you added a negative sign to the exponent on the left term, which isn’t there, to turn that base into 5/2 as well.

Again, if the base is less than 1, a smaller exponent will result in a larger number.

Obediah Jones was correct in one of his comments to you, although

“The fact that they stemmed from the same inequality is why the value of x is either less than or greater than the exact same number, 16/7 16/7.”