On round freeway turnouts there are almost always signs that say to slow down to a lower speed.

The reason for this is that the frictional force of the tires on the road will not always be enough to keep a car under control at a higher speed. 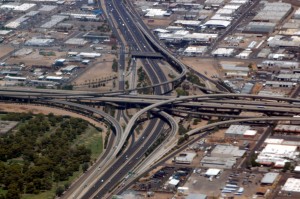 Two devices that civil engineers use when constructing roads to make them safer are giving the turnout circle a bigger radius and putting it at an angle.

Making the circle have a bigger radius will make the turn less sharp (thus lowering the centripetal acceleration).

Putting the turnout at an angle will make the normal (perpendicular to the surface) force have a component that keeps the car from losing control.

Both these methods will make it technically safer to drive at higher speeds on such a turnout, but it’s definitely still advisable to slow down.